Language feels so natural to us that we can often take it for granted—we forget the years it takes us to master it as children. It’s much, much harder for computers. We took our first steps understanding and answering questions with voice search in 2008, and the Knowledge Graph in 2012. Just as a child first talks about single items like “mama” or “car,” the Knowledge Graph started by providing information on individual entities like “Barack Obama” or “Shah Rukh Khan.” We graduated to answering simple questions about those entities, so you could ask “How old is Stan Lee?” or “What did Leonardo da Vinci invent?” We soon got a little smarter, so if you asked “What are the ingredients for a screwdriver?”, we understood you meant the cocktail and not the tool.

Now we’re “growing up” just a little more. The Google app is starting to truly understand the meaning of what you’re asking. We can now break down a query to understand the semantics of each piece… 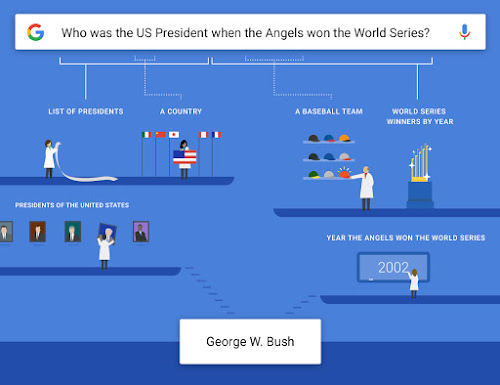 …so we can get at the intent behind the entire question. That lets us traverse the Knowledge Graph much more reliably to find the right facts and compose a useful answer. And we can build on this base to answer harder questions.

Here are a few new types of complex questions Google can now handle. First, we understand superlatives—”tallest,” “largest,” etc.—and ordered items. So you can ask the Google app:

“Who are the tallest Mavericks players?”

“What are the largest cities in Texas?”

“What are the largest cities in Iowa by area?”

Second, have you ever wondered about a particular point in time? We now do a much better job of understanding questions with dates in them. So you can ask:

“What was the population of Singapore in 1965?”

And finally, we’re starting to understand some complex combinations. So Google can now respond to questions like:

“What are some of Seth Gabel’s father-in-law’s movies?”

“What was the U.S. population when Bernie Sanders was born?”

“Who was the U.S. President when the Angels won the World Series?”

We’re still growing and learning, which means we make mistakes. Ask Google “Who was Dakota Johnson’s mom in the movie?”, and we’ll respond with the movies of Dakota Johnson’s real-life mother Melanie Griffith, not the actor Jennifer Ehle who played Anastasia’s mother Carla in the 50 Shades of Grey movie. (Hey, that one’s tricky even for people!)

But the next time you’re curious about something, ask the Google app, and know that we’re working hard on understanding your questions better so that we can find the answer to whatever you’re looking for.

About the Author: admin